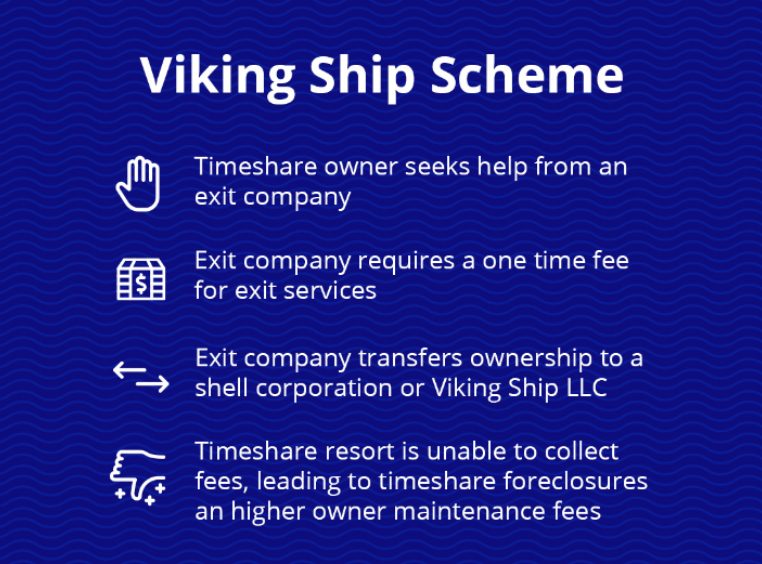 A "Viking Ship" scheme is used to describe a certain type of scam employed by unscrupulous exit companies in the timeshare industry.

The "Viking Ship" process begins when a timeshare owner, who is looking to get out of a timeshare, decides to employ the services of an illegitimate exit company claiming to also be a timeshare transfer company. The exit firm then says they require a large up-front fee with a "100% money back guarantee" and promises to find a buyer for the timeshare. Instead, the exit firm will transfer the timeshare ownership over to a so-called Viking Ship LLC, which is a "shell" corporation, instead of selling it. The Viking Ship LLCs do not have assets and are formed specifically for the purpose of appearing to be the owner of tens, hundreds, or even thousands of timeshares provided by these exit companies.

The worst part of Viking Ship schemes is the risk it places on owners attempting to exit. Owners are expecting to work with a firm that will sell their timeshare legally, and instead are having it transferred unbeknownst to them.

Fortunately, more protection for timeshare owners has been greatly increased with the 2013 amendment to the Florida Vacation Plan and Timesharing Act (Florida House Bill 7025). This amendment makes it much harder for timeshare exit companies to get away with these viking ship transfers, by mandating that they keep all upfront fees in escrow until the transfer can be completed and verified. This law not only applies to all timeshares located in Florida, but also those offered for sale in Florida.

Unfortunately, the law has not stopped all timeshare exit companies from attempting timeshare exit scams. Timeshare owners should always be wary of the fraudulent tactics pushed by exit companies. If the exit firm is seemingly vague about who the timeshare is being transferred to, there's a chance that it is because ownership is being taken over by a shell corporation.

We always encourage owners who are thinking about getting rid of their timeshare to discuss their exit options with their timeshare resort before seeking help from a third-party exit firm.Timeshare.com provides timeshare owners with the tools they need to safely exit their timeshare. Know your options before you attempt to sell or cancel your timeshare. We provide a full toolkit on timeshare exit strategies to help educate owners on available options.